According to the method of production on the market, there are several types of olive oil, which differ significantly from each other. The differences are not only in the way of creation but also in chemical composition, consistency, taste and health properties.

Knowing the types of olive oil will make your diet much healthier, and agree that it is important to know what exactly you put on the plate, right?!

Here are briefly the types of olive oil that you can find on the market:

Extra virgin olive oil, also known as EVOO, is the best olive oil you can find on the market. The best of the best. It has been known since ancient times as “liquid gold” because of its almost magical healing and taste qualities. A number of nutrition experts claim that pure, cold-pressed olive oil is used as a dietary supplement to treat many ailments from liver and heart problems to cancer. The direct role of extra virgin olive oil in the treatment of these serious diseases has not been proven, but its prophylactic role is indisputable.

If you insist on using olive oil, let it be the so-called cold-pressed extra virgin olive oil. Extra virgin olive oil is made from olives that have the least rot, because they were crushed shortly after harvest and in this sense are as fresh as possible. To prove its unsportsmanlike taste and its dozens of health benefits, extra virgin olive oil must pass a taste test with a jury before being placed on the market to ensure the best taste. From a professional point of view, EVOO oil must:

Extra virgin olive oil, created by the method of cold pressing, is practically unrefined olive oil, ie unfiltered oil, as it is extracted naturally and usually has a golden-green color with characteristic odors, aromas and a bitter and peppery finish.

Cold-pressed olive oil is obtained through the FIRST olive press, which is the purest and richest in antioxidants, polyphenols, minerals and vitamins, which makes it a natural antioxidant and immunostimulant. It is also recommended to consume up to 20 years of olive oil on an empty stomach to cleanse the gastrointestinal tract and provide a dose of minerals and vitamins to the body.

Extra virgin olive oil is the most useful, but it is also the most expensive on the market. 7 to 10 kilograms of olives are used to produce a liter of this olive oil.

Ordinary olive oil has a standard emission and is one step down as quality from virgin olive oil. It is bleached, neutralized and deodorized during refining and should really only be used when sautéing, baking and frying at medium temperature. Its aromas and taste are often not due to the olives, but to additional substances added in the production process. 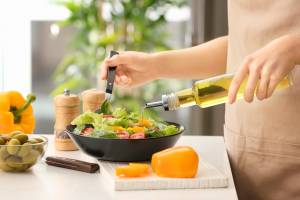 Olive oil is produced from the third and fourth press of olive oil and is often seasoned for more flavor with flavors and other chemical-based additives. It is not uncommon to find brands on the European market that offers refined, additionally flavored olive oil with a label of extra virgin olive oil in order to drastically reduce the price so that it meets the purchasing power.

They call it a light olive salad because if there are no additional colors, this olive oil is softer in taste than extra virgin olive oil, lighter in texture and lighter in color.

The lowest quality type of olive oil, also known as pomace olive oil. After pressing the olives, a certain mixture remains, which instead of being discarded, turns after dilution into a residual product – olive oil. Chemical solvents are used to make it, so if you see “olive oil” on the label, consider using it in your household.